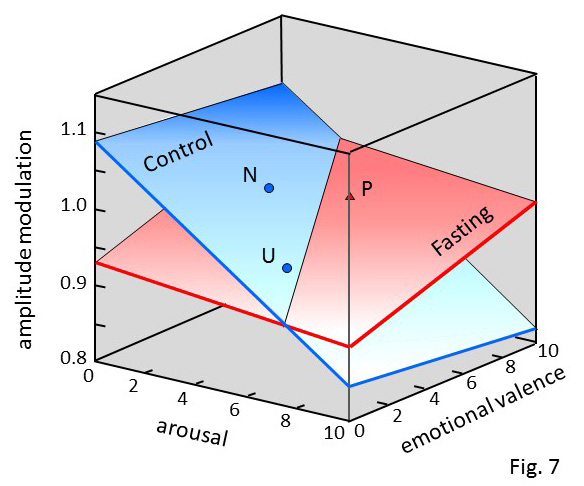 To relieve or manage stress, objective assessment of stress is required. Instead of direct assessment of stress, we have been investigating whether responses to emotional stimuli are modulated by stress. As emotional stimuli, 8 pleasant (P: high arousal and high emotional valence), 8 neutral (N: low arousal and moderate emotional valence), and 8 unpleasant (U: high arousal and low emotional valence) pictures were selected from the International Affective Picture System (Univ. of Florida) database and presented to 20 healthy volunteers for 3 s per picture. Psychological scores using a visual analog scale (VAS) indicate that the emotional valence of the selected pictures was perceived by the participants as expected. Magnetoencephalograms (MEG) and traditional physiological markers of heart rate and oxygen saturation of the peripheral artery (SpO2) were recorded simultaneously. Amplitude modulations of alpha rhythm (8–13 Hz) by presentation of emotional pictures were compared in a normal (control) condition and in a fasting-induced stress condition. Data for 17 participants were analyzed by two-way [emotional category (P/N/U) × condition (control/fasting)] repeated measures ANOVA and a multiple comparison test with Bonferroni’s correction. Significant interaction in amplitude modulation was observed in the early stage (within 0.5–1.75 s from the start of picture presentation; p = 0.019). In the control condition, alpha rhythms were more significantly suppressed by both pleasant and unpleasant pictures than by neutral pictures (P < N: p = 0.011, U < N: p = 0.044). In the fasting condition, alpha rhythm was more significantly suppressed by unpleasant pictures than by pleasant pictures (U < P: p = 0.018). In other words, the amplitude depends on arousal in the control condition, while it depends on emotional valence in the fasting condition. Since it is known that alpha rhythm is suppressed by attention to visual input, these results suggest that attention to pleasant stimuli is lost under fasting-induced stress. On the other hand, heart rate and SpO2 were not different between the emotional categories and were not modulated by the fasting-induced stress. MEG seems to be practical and powerful for objective detection of prompt response to emotion and assessment of stress, probably because of its high temporal resolution and selectivity to a specific brain region.